Delight of My Heart

According to WordPress, the tag that people most often click on to reach Wheat, Not Oats, Dear–the tag that calls out to the most people, the tag with the most compelling siren song, the tag that sings, it would seem–is: 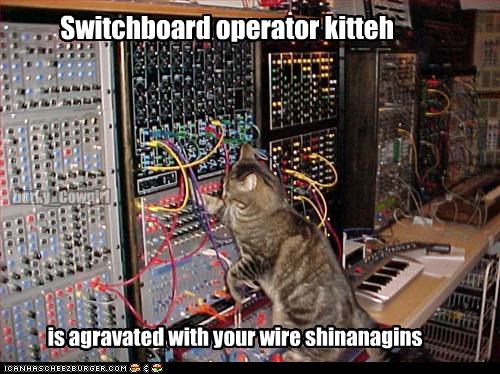 When something like this exists in the world, who among us can be surprised?

On Friday, November 20, the Large Hadron Collider re-started operations after a 14-month delay.

A little over a year ago, when they–The Scientists–OFFICIALLY started operations, and OFFICIALLY started beaming protons around the 17-mile long underground tunnel they built, the “electrical connection between a pair of the collider’s giant superconducting electromagnets vaporized”, which is a nice way of saying “NO DOY, IT WILL GET HOT IN THERE, IF YOU ARE BEAMING PROTONS AT SEVEN TRILLION ELECTRICAL VOLTS!!!!!!!!!!”

I am a fan of scientists. I am also a big fan of pictures of scientists caught in unguarded moments of scientific joy. The CERN [European Organization for Nuclear Research–see also In My Blogroll] website has an entire page of pictures up, at the moment, of this LHC reboot. It’s a bunch of scientists, in a room–I believe the room is called the CERN Control Centre, no lie–trying to make things work. They’re such wonderful pictures, you all. They’ve made me laugh with such joyful laughter, is what.

ME: These pictures must be shared, and I shall tell it like a little story!

I’ve picked the best of the lot. 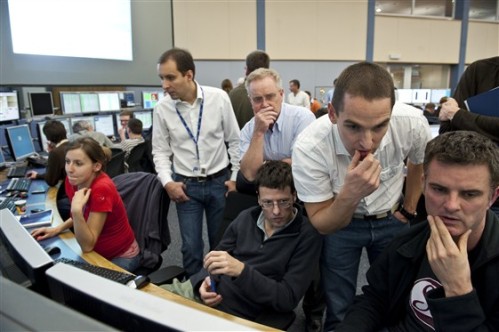 This is one of approximately 30 pictures of scientists grasping their chins, like in the movies.

[You just know that this fellow is a rockstar among physicists. The hawk nose, the leather vest, the raffishly unbuttoned shirt. “Dr. Rock”, they call him, except probably the French word for “rock”, because this is clearly not an American physicist, and if he is then I don’t know what to believe in, anymore. ] 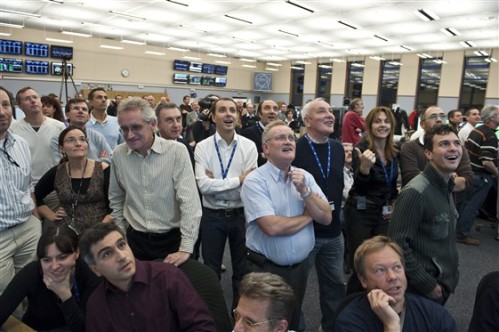 This might be my favorite shot of the lot. Based upon where it’s placed chronologically in the “photo album”, the “main event” has not yet occured. But something special is happening here, nonetheless. It’s like whatever they’re watching, on the screen they’re watching it on, MATERIALIZED INTO THE SHAPE OF SANTA CLAUS.

They wait. Quietly, the scientists wait; they watch. 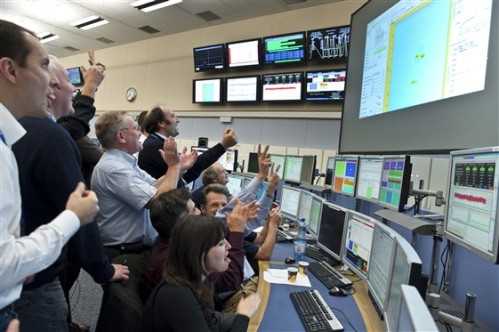 [Also, what’s going on with the woman in the bottom of the frame? Can we talk about this?]

ROOOOOAAAAAAAAR! That is the sound of that man’s happy lion laughter.

Let me assure you: If we could see what these people are looking at, we would be none the wiser.

The final pictures show the crew settling back into the business of proton collisions; they’re not going to accelerate all by themselves, you know!

On the CERN website, there is a video showing some of the above. On top of the page, in bold, black letters, it states:

LHC is back! Clockwise circulating beam established at ten o’ clock this evening.

The below fell somewhere in the middle of the photographs.

I thought we should end on a high note.

This was one rainy weekend, here in the greater Chicagoland area. Rain, rain, rain; more rain; rain clattering on the outside of one’s kitchen window air-conditioning unit, with the sound of an entire World War II artillery unit! Aaaaaaaaaaaaaaaaaaaa! I did battle with the rain a time or two this weekend, generally forced to do so only by utter necessity. The first time I ventured out, the rain literally lashed down upon me as though a young tough had flung a bucket of water into my face. The second time, the rain was blowing in  perfectly horizontal lines:

…so that by the time I reached my destination, I appeared to have immersed myself in a body of water while fully clothed. [“Don’t you have an umbrella?” some individuals asked, among other things, and some of those individuals got smacked by yours truly. I have decided that it is HYSTERICALLY FUNNY when people say: “yours truly”.]

At the same time, however, I felt like a baby. A babe in arms. “Lily-livered”, as they say. It’s only rain; there was no chance that it would physically harm me, unless catching your death of cold and getting the whooping cough counts. But it may as well have been raining railroad spikes, for all that I wanted to leave my apartment, or any building I happened to be in. Railroad spikes, I say. Big ones.

As aforementioned, the rain was RUNNING LAVA TORRENTIAL–I mean, it’s been many, many moons since I’ve seen water come down like that. When we finally gained the waiting room area of the fingerprint establishment, we had to write our names down on a list, and wait for what was surely the politest young man in the entire universe to call our names off and get ‘er done.  Surprisingly full? The waiting room area of a fingerprinting establishment on a Saturday morning at 9 a.m., when the sky outside is practically inhabited by marine life. On the wall, over the reception desk, was an enormous and ill-framed collage of various animals, because nothing says “law and order, damn it” like an animal collage which appears to have been designed by a fourth-grade art class!

The actual act of getting fingerprinted was sort of interesting; they gently take your hands, and roll your fingers over the glass-plated area of this little machine-o deal, and you can view your fingerprints springing to instant life on a computer screen, unique as ten snowflakes! Chatty and curious in such situations, and in this case also subconsciously concerned that I had, perhaps, unknowingly committed a crime during a period of amnesia, and was about to go to jail for the rest of my life when my prints were taken and flashed on the screen, perhaps with my crime nickname attached–“The Viper”, “Rattlesnake Jones”, something like that–well, I lost my head completely, and apparently decided that only the most inane line of questioning would suffice:

ME: So! How do you…become good at this?
POLITEST YOUNG MAN IN THE ENTIRE UNIVERSE: [politely.] Practice, I guess.

In other news, I’m sure that everybody heard tell of the official start-up of the Large Hadron Collider, yes?

HERE for a wonderful explanation/graphics/spinning things regarding how the collider works.  Go go go. I’m not kidding. Click the link, Sparky.

In honor of the start-up, I’m adding the CERN website to my blogroll, off to yon right. It’s pretty much fantastic. Sample line from their homepage earlier in the summer:

“Unusually for the holiday season, the car parks are full, finding a table at lunch is a formidable challenge, and people can (more than ever) be found in their offices late into the night. All the evidence points to one thing…the most ambitious particle collider in the world is just a few weeks away from its first proton beam!”

I mean, I could just literally die of happiness, reading that. Also on their website, you have pictures like this:

With the following caption:

“Particle tracks seen in the LHCb vertex reactor (VELO) and triggered by the experiment’s calorimeter during synchronization tests last weekend.”

Here’s to particles colliding with each other and revealing the origins of the universe!

Finally, let us rejoice in the coming of fall–it’s coming! It’s here-ish! It’s going to be crisp! Let us rejoice, nonetheless, that warm weather is predicted for the coming weekend, because I sure am attending the Hideout Block Party, and I sure want to be warm, out there, in the outside, and the musical-ing.

This is the first sonnet in the Anne Stevenson poem “Sonnets for Five Seasons.”

Which represents you, as my bones do, waits,
all pores open, for the stun of snow. Which will come,
as it always does, between breaths, between nights
of no wind and days of the nulled sun.
And has to be welcome. All instinct wants to anticipate
faceless fields, a white road drawn
through dependent firs, the soldered glare of lakes.

Is it wanting you here to want the winter in?
I breathe you back into your square house and begin
to live here roundly. This year will be between, not in,
four seasons. Do you hear already the wet
rumble of thaw? Stone. Sky. Streams. Sun.
Those might be swallows at the edge of sight
returning to last year’s nest in the crook of the porchlight.